“Raif Badawi was flogged in public 50 times in January. He has 950 lashes and nearly a decade in prison left to serve – simply for blogging about free speech. Raif is still due to be publicly flogged 50 times every week after Friday prayers until he has been lashed 1,000 times. Ask Saudi authorities to halt the barbaric punishment and to free this prisoner of conscience.”

Quoted from the Amnesty International website, where you can help by signing their petition to have him freed. 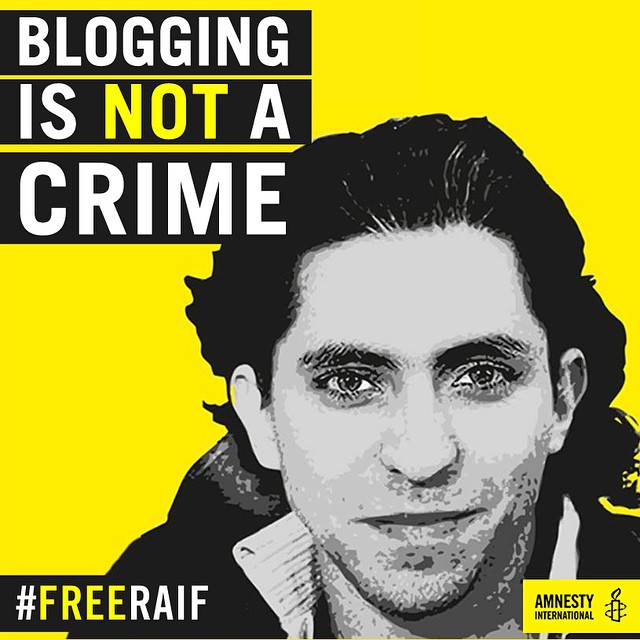 Raif Badawi is the Saudi Arabian writer and activist that was co-founder of the Saudi Liberal Network, with Suad al-Shammari, a female rights activist.

The network announced a “day of liberalism” to be held on May 7  in Saudi Arabia, to call for an end to the influence of religion on public life in Saudi Arabia. A conference was planned in Jeddah for the occasion, but was cancelled after they were advised by Saudi authorities not to proceed.

On the 17th of June 2012 Badawi was accused of insulting Islam through electronic channels and arrested in Jeddah. In December he was also charged with apostasy, a charge which carries the death penalty. In 2013 he was found guilty of various charges and initially sentenced to 7 years and 600 lashes, but in 2014 this was increased to 10 years and 1000 lashes plus a fine.

The sentence called for the lashes to be administered over 20 weeks. He received the first 50 on January 9, 2015. The second 50 have been postponed more than 12 times now due to his poor health, which has deteriorated since the first set of lashes. His wife, Ensaf Haidar, is convinced that Raif will not be able to survive his sentence and condiders it a slow death sentence. She has fled to Canada, with their children, after receiving death threats.

After his arrest Amnesty International designated him a prisoner of conscience, “detained solely for peacefully exercising his right to freedom of expression”.

An Amnesty International spokesman was quoted as saying,

“Even in Saudi Arabia where state repression is rife, it is beyond the pale to seek the death penalty for an activist whose only ‘crime’ was to enable social debate online”.

Human Rights Watch asked the Saudi government to dismiss the charges. They are quoted as saying,

“The charges against him, based solely to Badawi’s involvement in setting up a website for peaceful discussion about religion and religious figures, violate his right to freedom of expression”

Raif needs all the help he can get.

It may eventually help to tip the scales in his favour!

Here’s some further reading for those who want to know a bit more.

A look at the writings of Saudi blogger Raif Badawi

Saudi Arabia’s history of hypocrisy we choose to ignore

Apologies for hijacking the Daily Post, but I was about to post this when I noticed the theme.

5 thoughts on “In a Crisis: Raif Badawi needs all the help he can get!”